Stephanie graduated from Sweet Briar College Summa cum Laude with a concentration in music performance. She has over 20 years of experience with various ensembles and orchestral groups and currently plays with Southern Maryland’s COSMIC Symphony Orchestra, Port Tobacco Players, the Three Notch Theatre, and for various musical theatre groups in the SOMD region. She was most recently heard in 2017 musical productions  of “The Christmas Schooner,” “Young Frankenstein,” and “Oklahoma.”  She frequently plays solo and chamber recitals, special events, and weddings throughout the Southern Maryland region and teaches private cello lessons.   When not playing the cello, Stephanie is a working to shape Research and Engineering talent with Naval Air Systems Command (NAVAIR) at Patuxent River Naval Air Station or throwing the Frisbee with either of her hound dogs, Sherlock and Walter. 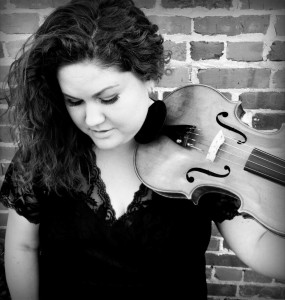 Originally from Pennsylvania, Holly started on the Violin at age 10. It wasn’t until her senior year of college that she found a passion for the Viola after a professor encouraged her to experiment with it over the summer. Holly holds a Bachelor of Fine Arts in Music Performance on Viola, with a minor on Violin, from Indiana University of Pennsylvania where she studied with Stanley Chepaitis and was mentored by Raul Faure. Holly was selected to be the first student to participate in the school’s exchange program with the Akademija za Glásbo (Academy of Music) in Ljubljana, Slovenia. There, she studied Viola with Mile Kosi who was flown in every week from Germany specifically to teach her. At home, Holly has played with the Johnstown Symphony Orchestra, Altoona Symphony Orchestra, IUP Faculty Quartet, and the Chamber Orchestra of the Alleghenies. After moving to beautiful New Bern, NC she was a frequent soloist and Principal Violist with the New Bern Civic Strings. She has performed regularly throughout Eastern NC with the Trent River Chamber Players and ensembles for the Carolina Coast Choral Festival, the Crystal Coast Choral Society, the Craven Community Chorus, and the First Baptist Church Sanctuary Choir. Holly was a guest musician for the 2013 Craven County All County Chorus and is regularly invited to schools to give presentations about string instruments and music. Holly is a freelance musician and has maintained a private Violin and Viola studio for over twenty years while playing hundreds of Weddings and private events. She has played throughout the United States and Canada with amazing musicians and conductors such as Lorin Maazel, Andrés Cárdenas, Istvan Jaray, Paul Saik, and Scott Laird.  Holly’s most memorable career moments have been performing at Carnegie Hall, playing with the Pittsburgh Symphony, performing for the 9/11 Memorial Concert in Shanksville, PA, playing for the President of Slovenia, and travelling to Croatia to perform. She is so thankful to have played in such amazing venues as Frank Lloyd Wright’s Kentuck Knob home, Tryon Palace, the NC Aquarium at Pine Knoll Shores, and the beautiful beaches of Bald Head Island and Coastal North Carolina. Holly is married to a Retired Staff Sergeant of the Marine Corps, loves the beach, and enjoys travelling to new places with her Husband and Son. She and her family now reside in California, MD and loves performing locally.

Erin Moss is an experienced flute player with 30 years of playing to her name. She has performed a variety of events including weddings, church services, and parties. Having played with many groups over the years, she has most recently worked with The Newtowne Players and Cosmic Orchestra. She has both a Bachelors and Masters Degree in Music Performance from Shenandoah University, and teaches private music lessons in Calvert County Maryland. In addition to flute, she has also studied, performed, and taught on piccolo, alto saxophone, and clarinet.